Do you live in a condo that prohibits gas and charcoal grills? To still cook outside, check out outdoor electric grills. Having used one for more than 5 years, here’s my Weber Q2400 Electric Grill Review.

While I know it feels annoying that you can’t have an open flame grill, burning down the neighbors’ houses would be a much larger problem. You still want the grilling experience, especially if you live along the coast. I bought an outdoor electric grill the first spring I was in my condo. Here’s my experience and review of the Weber Q2400 Electric Grill.

Over the years in my coastal condo, I’ve owned several Weber electric grills. When it was time to replace my Q240 grill (after 5 years of going strong), I think twice to buy the current Weber Q2400 electric grill model.

And one more note: this post contains affiliate links. This means I may receive a small commission if you buy through my link. You won’t pay any more if you use this link.

Why I bought the Weber Q2400 Electric Grill

In my coastal condo community, electric grills are the only allowed option. And honestly, the idea of not having to refill a propane tank is nice. Before the state fire rules changed, we were allowed to run a natural gas line, but it was too expensive. The thousands of dollars to install the gas line would be better spent on other projects around the house.

When I bought my first electric grill, I decided the Weber grill has the best construction and electric heat option. And each time I needed to upgrade, I bought another Weber. They are well worth the money.

Salt air can really take its toll on metal. I keep my (covered) Weber grill outside year round on my patio in the salt air and for 5 years it held up really well.

Tip: Buy an grill cover and use it so the exterior is not completely exposed to the elements. It really does help.

If you’re wondering if an electric grill can create great grill marks and a smokey flavor, it can. The enameled cast iron grates on the Weber Q2400 can heat up to at least 500 degrees (I measured it).

Tip: When you use your grill the first few times, try cooking things such as chicken legs or burgers. The fat helps “season” the inside of the grill. You can also try using wood chips either in a small smoke box or make your own with aluminum foil to enhance the flavors.

Weber has two versions of its outdoor electric grill, the Q1400 and Q2400. The grill construction of the two is the same, with the main difference being size of the grill. The surface area on the Q2400 allows you to grill more food at a time. Even for one person, I still like to grill up a large package of chicken legs in one batch.

In the current versions of the Q2400, the gates are now an gloss enamel finish compared to the matte finish on the previous models. The grates clean up so much easier with this finish and retain heat really well. Cast iron grates are really important feature on electric grills to reach and maintain higher temperatures.

Both Weber electric grills can be used in a regular outdoor outlet so you don’t need to run an separate line for it, but I wouldn’t use multiple high-use electrical appliances on the same line at the same time.

Also in the newer models of the Q2400, there is now a ground fault on the power cord itself. I really like this safety feature. Electric grills will use a lot of electricity so always remember to keep safety in mind.

The smokey flavor generally comes from previous grilling splatters on the grates and grill base. Over time, the carbon splatter accumulates in the base of the grill. Sometimes you can knock some of it off. While the grill will get very hot (500+ based on my measurements of the grates), it’s not enough to completely dry out the splatter.

Leave the grill on for about 10 minutes when you’re done to scrape down the grates. I also clean the grates after pre-heating. I find it’s easier to clean up the grates if you do it right after you’re done grilling rather than waiting until next time.

Leave enough time to preheat your grill. This is really important for electric grills so that the grates can heat up to allow for searing. I usually turn my grill on to preheat while I’m preparing whatever I’m planning to grill.

If you’re using an extension cord, use shortest one you need in the heaviest grade you can find. I’m not an electrician so do this with caution as you don’t want to start an electrical fire. Also make sure you replace your extension cord regularly and unplug it as soon as your done. I think my last extension cord melted onto the grill’s power cord. I replaced the grill, because it was about 5 years old at that point. My other option was to purchase a new heating element.

Overall I’m thrilled with my Weber Q2400 Electric Grill, and Weber electric grills in general. They hold up really well even when left outside (covered) in the salty air for years. They’re great for anyone that cannot have a gas or charcoal grill. While there are benefits to having a flame-based grill, outdoor electric grills can hold their own to reach a great experience and taste.

Over to you. Are you thinking about getting an electric grill or do you have one already? 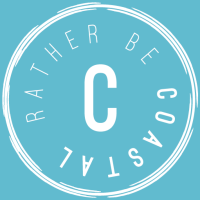 Hello and welcome to Rather Be Coastal. My name is Cara and I'm here sharing my experiences about living in a coastal condo.

Welcome to Rather Be Coastal

Hello and welcome to Rather Be Coastal. My name is Cara and I'm here sharing my experiences about living in a coastal condo. Read More…